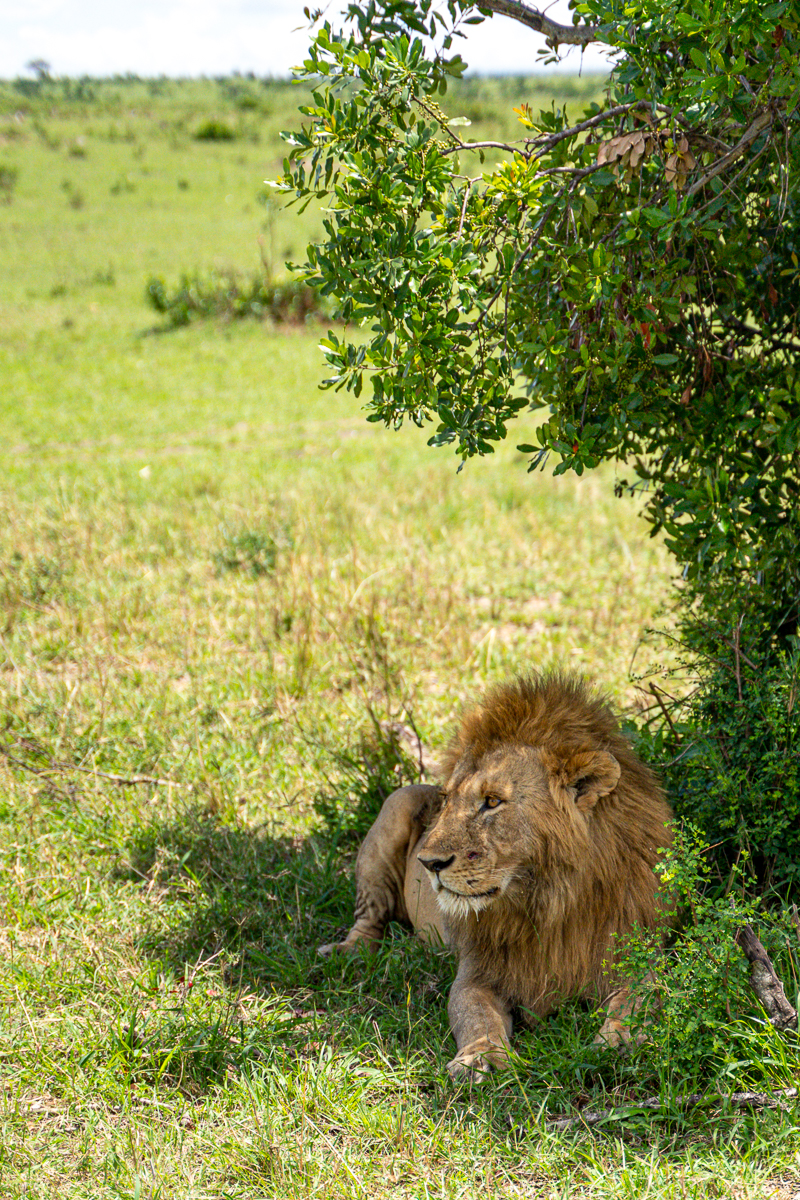 Lessons in sustainability from the cradle of civilization

It was the fourth day of safari on the Maasai Mara in Kenya when I was working as a photographer for Kin Travel. We had already ventured out into the open land on a few “game drives” already by this point; climbing into massive open-air 8-passenger Land Cruisers to spend hours rumbling through the terrain. While the wildlife in general is extremely abundant, the rarity of each individual species is quite varied. Giraffes, wildebeast, zebras, and even baboons had become commonplace, but elephants, rhinos, and big cats had still eluded us.

This day our Massai guide Wilson drove along the banks of a gentle stream while the afternoon sun beat steadily upon the canopy above us. Somewhere along the way we turned around a bend, when Wilson suddenly brought us to a rapid yet steady stop in our tracks. With a hush, he pointed our attention about 10 feet to the side of the truck where a full grown male lion lay resting upright in the shade of a tall bush. This was the closest we had gotten to any wildlife, and the rarest of sightings by far. With a surge of adrenaline I swiftly grabbed my camera and held my breath as I captured frames as fast as I could.

He was magnificent. Majestic. Sovereign. Seasoned eyes peering over scars on the bridge of his nose told his story of coming of age. Our arrival was acknowledged, and then he promptly returned to go about his business: relaxing his powerful musculature, letting a soft gaze drift along the horizon, drawing in the steady breeze, and listening to the nearby stream bubble over smooth stones. After a few minutes of bursting through frames, I finally realized that neither this lion nor my group were in any rush to go anywhere. I set my camera aside, and took several slow breaths to let my heart return to a steady state. Together, we all sat in profound silence.

Brian Jones is a curious and alluring personality. I first met him in his warehouse loft apartment in Bushwick, a fringe neighborhood of Brooklyn, New York. A mutual friend had mentioned he was holding a weekly guided meditation and she brought me along. I was greeted at the door by Brian; he had a kind smile, long blonde hair, and a slender frame. He introduced me to his roommate Punsok Thupten, a Haitian born monk that had spent 20 years in a Tibetan Buddhist monastery to recently emerge so he could share meditation with the world. Immediately entranced, Brian and I became good friends very quickly.

After university, Brian moved to Kenya to help run an orphanage and develop the foundations of his future aspirations. Through these connections in the not-for-profit world, he learned from many teachers about sustainability, social impact, and the magic of safari.

A small community of thought-leaders within the safari industry have began to utilize travel and hospitality as a tool for social and environmental impact. The central idea is to engage local communities as stakeholders in the health and well-being of their ecosystems. The better preserved these ecosystems are, the more the communities can benefit from hospitality and tourism. The effects of this formula have gone so far as to convert local hunters and poachers into organized wildlife conservationists.

In the spirit of this formula, Brian created Kin Travel to design experiences that bring a new generation of traveler to inspired sustainable hospitality providers around the world.

When I landed in Nairobi, I was met by a driver holding a sign with my name and another traveler on the group trip who was also on the same flight from New York. The first thing I noticed was the pace that everyone in the city was walking, which seemed about 40 percent of the average sidewalk in my home of New York City.

As we left the airport for our local hotel, we found ourselves immediately driving on a road that borders Nairobi National Park. On our left ran a 5 foot fence that holds the edge of 120 km2  of preserved open land. On our right, the center of a metropolitan population of 10 million people. In the distance within the park I could see safari trucks cruising along dirt roads. A bit baffled and getting that reminder that I don’t know anything, I asked our driver simply “what does the word safari mean?” to which he kindly replied “when you go out to see animals.” I understood that not all safaris are created equal, as all of my tourist trap alarm bells were ringing.

At our hotel I met the rest of the travelers on our group journey, a fashionable mix of 20-30 something year olds mostly from the east and west coast of the United States. We enjoyed some beers around a campfire and turned in early to prepare for our morning flight to the Maasai Mara.

The next morning we found ourselves filling all 16 seats of a prop plane that would take us to a stretch of land on the Kenyan side of the border to Tanzania and the Serengeti. We flew just below a sparse scattering of cotton candy clouds while we watched the city fade away and the naked African earth cover everything in sight. The land is a rich melange of mountains, streams, dust, dense greens, and it holds a powerful aura unique to land I’ve seen among my travels.

When we touched down on a long gravel airstrip defined by coconut sized rocks, we were warmly greeted with hugs from our guides for the next week. They were Maasai tribesman clad in red and blue plaid blankets draped like capes called shuka, under the employ of our hospitality provider Cottar’s 1920s Camp. Their smiles were warm, and laugh contagious.

The next week was packed full of life changing activity. The Cottar family has been pioneering sustainability and impact efforts in collaboration with the Maasai on this land for 100 years, and has been recognized as one of the top 10 sustainable tourism providers in the world. The itinerary was as much a masterclass in environmental conservation, as it was rugged outdoor adventure, cultural immersion, and luxury hotel stay.

Our game drives into the open land became the backdrop for the vision of sustainability the Cottars are working towards. As we set out across the borderless habitat each day, I was able to witness natural order. Each species has carved out their place according to their way of life. Grasslands and waterways foster grazing herds whose speed, hoofs, and horns create balance with the predators who depend on them.

The Masaai have carved their own place on the land, living in cohabitation with the goats and cows that support them. Maintaining life means shepherding their stock into open lands, where they can eat freely near the safety of human spears. The Masaai diet consists of only meat, milk, and blood; it sounds so simple, but coming from a society of plastic wrapped goods it was so profound to see so viscerally how life depends on communion with nature.

Like any community the Masaai also have struggles and needs as well. Women strive for more opportunity in education and employment, schools seek support and care for their students, and leadership fights to defend land from encroachment of governmental policies. The Cottar’s Wildlife Conservation Trust educated our group of travelers on these challenges, and how they community plans to combat these challenges by providing sustainable tourism opportunities to fund the social and environmental impact initiatives at hand.

This formula of sustainability is an amazing gift the Masaai people and their land has to share with the world. A formula for how a commitment to conservation of the natural order can change the world for the better.

After having our hearts and minds filled on this week long safari, the Kin Travel Journey wound down with 4 days in Kenya’s coastal town of Lamu. The quiet and historic town with Muslim roots features beautiful white stone architecture. The area where we stayed was only accessible by boats that drift along a smooth inlet from the Indian Ocean. It was an idyllic setting to rest our bodies and reflect on our journey.

As I reflected back on my experience, I felt like I had just experienced the most advanced technology in the world. Whereas modern people are fighting the toxic side effects of industrialized civilization on our planet, the Maasai are living off goats, singing and dancing around campfires, and happy as could be. Weaving human life harmoniously into the tapestry of nature feels like a keystone challenge that humanity needs to face with urgency.

In order to see the change we need to make in our lives individually and collectively, it is important to have and share the experiences and learning opportunities that sustainable travel can provide. So much of modern society is set up to hide away from sight our marginalized communities, the source of our consumables, and destinations of our waste.

Before I knew it, the time had come to say our goodbyes. Our group had grown so close over the past 10 days while witnessing such a powerful people and place, it was a challenge to go our separate ways. As my flight left the ground for New York, my mind began to swirl with thoughts; the emails I had to return to, the density of concrete in the city, the desire to affect more change.

When I looked out the window at the powerful earth below one last time, a vision of the lion we met entered my mind. He reminded me that he was in no rush to go anywhere. I took some slow deep breaths to calm my active mind, and together we sat in profound silence.

Bikes Over Bangkok
No items found.